Chris reads some feedback from Twitter and asks for listeners to review The Raven & the Writing Desk on iTunes.

The Story: The Cuckoo, Part 1

Meet John, an incubus who was kicked out of his noble family once his true nature was revealed. He’s set his sights on the Baronesa Delilah Velasco de Moraine, a shy, beautiful Tournish noblewoman: recently wedded to a Metamorian lord, and completely overwhelmed by the strangeness of Metamor’s high society. John has ideas about how to help her be more accepted in the world that rejected him — but what does he get out of it? And who is he working for, anyway?

PRODUCTION NOTE: The tango music used in this story is “Last Tango in NYC,” by The Four Bags. The music was released under a Creative Commons Attribution/Non-Commercial License on Mevio’s Music Alley, the podsafe music network, which unfortunately shut down in April 2014. You can find some of The Four Bags’ other music at their website, http://thefourbags.com.

For today’s episode I sat down with long-time friends and award-winning authors Tee Morris and Pip Ballantine to discuss the pros and cons of different strategies for publishing your work. We also talked about the different social media platforms that are available, and which ones are the most effective tools for authors looking to build their audience and promote their work. 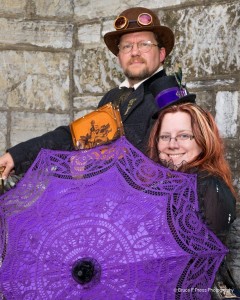 Referenced in this interview:

The Worlds of Philippa Ballantine

The Ministry of Peculiar Occurrences

Review Tales from the Archives on iTunes

OzGuvnor talks about the unexpected benefits of putting in small, incremental efforts on a consistent basis. Nobilis suggests an easy way of leaving feedback for the show. Sara T. talks about the final installment of FLYING FREE, big emotions, and bisexual characters in fiction.

Review The Raven & the Writing Desk on iTunes

In this week’s episode, Sara T. and Mildred discuss the rapid changes in American society during the 1960s and 1970s, the spectrum of human sexuality (and our failure to recognize it in either ourselves or others), and just what it would take to kill Kyia in the world of Metamor City.

Barbara is ready to take a stand for her rights as a gay woman, but forces more powerful than her may put an end to her service with Eagle Flight. Elias, caught in the middle, has to choose how to respond.

The Elysian Springs Kickstarter has been delayed until Monday, July 6th, but the next part of FLYING FREE is ready a day early!

As the Cold War heats up in Vietnam, Barbara receives a most unwelcome letter. Can Elias help her contain the damage?