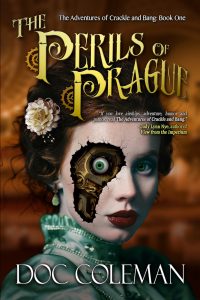 In this episode I interviewed Doc Coleman about his new book, The Perils of Prague. This was a live interview conducted with a studio audience at Balticon 51.

Buy “The Perils of Prague” on Amazon

Liam and his fellow wizards launch a risky gambit to save their airship fleet.

In which Liam has a strange encounter while attempting a divination.

In the year 1833 CR, a young wizard takes part in a daring airship raid into the heart of enemy territory. Too bad it’s probably a suicide mission…

Buy your copy of Tales of a Tesla Ranger — all proceeds go to the P.G. Holyfield Children’s Trust.

If I needed any further proof that podcasting is my gateway to a life at the cutting edge of social commentary, it has arrived: Gail Carriger, she of the imported tea and harem of Armenian lovers, has provided me with an Advance Reading Copy of her new novel SOULLESS. The book is being published by Orbit USA and will reach store shelves on September 29th, 2009.

I’ll be perfectly frank and say that I didn’t expect much of this book. Gail is a dear friend of mine, and I have had several friends over the years who fancied themselves writers and were, sadly, not nearly as good as they thought they were. The fact that Gail was published did little to change my expectations, because the urban fantasy/paranormal romance market has published some really bad books in recent years. (I won’t name names, but skim the reviews on Amazon if you want to see what kind of crap can get past the editors these days.) When Gail gave me a copy to read, I accepted it with the genuine pleasure of being invited to share in a friend’s success, but I didn’t have much hope of being impressed.

I am very pleased to report that I was proven utterly and completely wrong. This is a marvelous book, and I am tremendously excited to know that it will soon be available for the rest of the world to share.

In SOULLESS we are introduced to Alexia Tarabotti, a proper Victorian lady who is burdened with a number of embarrassing social problems. First, her father is both Italian and dead. Second, she is still unmarried at the appallingly old age of twenty-six. And nearly as embarrassing as either of these, she has no soul. In Gail’s world, that doesn’t make Alexia a zombie or an automaton — though she is known for being blunt and rather uncreative — but it DOES make her anathema to the vampires and werewolves who occupy the highest levels of London society. All it takes is a touch from Alexia, and the fiercest vamp or were becomes temporarily human again.

Alexia gets herself into a bit of trouble when she accidentally slays a young vampire who tries to bite her without permission at a party. This catches the attention of Lord Maccon, the loud, crass and devastatingly handsome Alpha werewolf who has been charged by Queen Victoria with policing the supernatural set. As Alexia and Maccon dance through a love-hate relationship of increasing intensity, they find themselves facing a set of interlocking puzzles: solitary vampires and werewolves are disappearing from the surrounding countryside, and new vampires are appearing without any apparent knowledge of the rules governing their kind. Alexia, Lord Maccon and their allies must unravel a tangled web of conspiracies while coming to terms with their complicated and conflicted feelings about each other.

Now, I’m not normally a fan of romances OR Victorian comedies, but I adored this book. Gail has created a wonderful cast of memorable and enjoyable characters; I’m particularly fond of Lord Akeldama, a flamboyantly gay vampire who dresses in High Rococo and speaks mostly in italics, and Professor Lyall, the quiet, intelligent and longsuffering Beta who tries to keep Lord Maccon out of social trouble. Just as importantly, though, Gail has done a first-rate job with her research: the characters talk and act like genuine Victorian Brits, and everything from the food to the clothes to the slang is authentic and period-appropriate. While this is technically an alternate history, Gail is much more interested in explaining the actual weirdness of the Victorians than in veering too far into lurid visions of a parallel universe. Those odd Victorian fashions and social rules? Obviously the work of vampires. Britain’s inexplicable rise to military dominance over half the world? Thank the werewolves and their highly efficient pack dynamics. And so on.

While Gail clearly takes her research seriously, the book maintains a light and humorous touch throughout. While there is darkness and horror in some places, and torrid romance in others, Gail has a habit of finding humor just about everywhere. It never feels forced, though, nor ventures too far into the land of farce. She keeps you laughing while consistently playing fair with both the characters and the audience. It’s an extraordinary balancing act, and the fact that Gail pulls it off so well in her first novel is a sign of just how talented she is.

If you’re a fan of urban fantasies, period mysteries, romantic comedies, or any combination of the above, I heartily recommend SOULLESS. Alexia Tarabotti may have no soul, but her first book definitely has it in spades.